When planning our Summer Solstice, Wild Onion wanted to honor a deity Who made Her presence known to us a few years ago at our annual gathering in New York state. Since that time, we’ve honored Her twice before, and it’s turned out to be one of the Grove’s favorite rituals.

At the end of our annual gathering, Wellspring, held at Brushwood Campground in Herman, New York, Wild Onions were tearing down our camp, and readying ourselves for the eight-hour trip back to Chicago. Our last act before hitting the road usually takes us to Brushwood’s nemeton to pour libations, make offerings, and just quietly visit with the Kindred.

As we finished our offerings, I was about to step backward off the mound when Caroline stopped me with a shout. Directly under my right heel was a tiny object no one had seen before, buried in the dirt. We dug it up, and found out that it was a small, white owl carving. Almost in unison, we all said, “Athena!” We placed the tiny owl, Athena’s companion, back near the offering shaft of the nemeton, and made our way home.

On the trip home, we discussed Athena, and wondered what possible message we were getting. Some of us were raised on the Greek mythos, but we realized we needed to do some research when we got home.

We found out that the ancient Athenians used to honor their Patroness each year with a celebration called the Panathenaia, or Panathenic Games. Every year the city of Athens celebrated with games, food, arts and public rituals in Athena’s honor. Everyone in the Grove loved the idea of reviving the festival – our only problem was that the traditional festival was also at the same time as Lughnassadh, another Grove favorite.

The Grove finally decided to alternate Panathenaia with Lughnassadh for the first two years, then move our rite to Athena at a rather non-traditional time, Summer Solstice. That way the Grove could honor two deities we hold very dear in the same year.

We have had very good luck the past few years with the weather. This year was hot and muggy, but everyone still had a great time. The sunscreen and extra water definitely came in handy.

For our main offerings, the Grove decided to make Athena a new peplos, a traditional Greek garment that the Athenians and presented to Her every year during the festival. We constructed it with strips of muslin sewn onto a rectangle of heavier muslin, then hand-dyed using turmeric and salt as a fixative.The final garment turned out a deep orange-yellow, and was decorated with a beautiful shoulder pin hand-made by Caroline, and tied with a hand-woven purple belt made from wool. 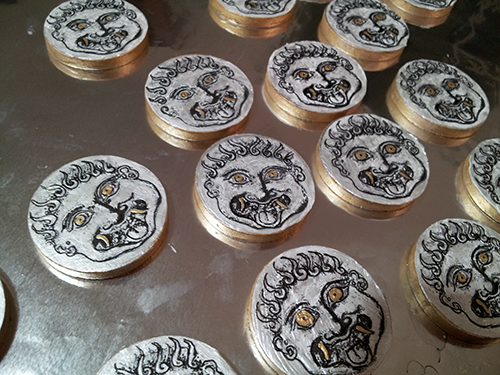 As our Grove giveaway, we decided to make small wooden tokens to represent Athena’s shield, Gorgon head and all.Using small wooden discs, gold and silver metallic paint and decoupage, the mini-shields turned out shiny mementos to be blessed and given to our attendees.

In honor of Summer, I made two honey cakes – one to offer to Athena, and one to be shared among the folk. The only regrettable outcome was that the sugar/honey glaze melted and puddled in the heat, but otherwise they turned out light and delicious. Chris bought some ice wine to go with them, along with some clear spring water for those who don’t imbibe.

Caroline also woodburned the Greek Alphabet Oracle into wood to take our readings for the ritual. With her steady hand and artist’s eye, the oracle turned out to be just the thing to get readings from the Kindred.

For our first Panathenaia, our Chief Liturgist Chris started researching how She was celebrated both in antiquity and today. One thing that caught his eye was the Athenian tradition at Bryn Mawr College in Pennsylvania. Chris decided to investigate further to see if any of their modern-day traditions could inform ours.

The students at Bryn Mawr have been leaving offerings and lighting votives at the statue of Athena, the college’s Matron, for decades. As She is a symbol of strength, wisdom and knowledge, the students ask Her aid when finals roll around.

Athena also plays a role in Bryn Mawr’s annual Lantern Ceremony, where the Sophomores present the new students with a lantern of knowledge each year to symbolize the passing of knowledge from one generation to the next. There is even a stone owl — one of Athena’s companion animals — which sits over one of the college’s entrances, and said to protect students, faculty and staff.

Chris discovered that during the Lantern Ceremony, the students sing a song in Greek to Athena, and added that to our liturgy as a way of bridging the old with the new. We integrated their song into our liturgy as part of our invocation. The lyrics to the song are included in the liturgy portion of this booklet (both Greek and an English translation). The song is beautiful and mysterious.

Se par he me is iman

We come to you to worship you, dread goddess.

Bless us we pray; give us wisdom.

Be with us always, Blessed goddess, hear!

This blending of old and new is one of the hallmarks of Wild Onion Grove. While some groves and druid groups seek to recreate the way our Ancestors worshipped, we place a very heavy emphasis on the phrase, “…in a modern context…” from ADF’s founding documents. The knowledge of the past is definitely important, but, equally important is for us to acknowledge that we aren’t our Ancestors. We don’t live in their world, and we have different traditions informed by modern technology, modern ideas and the modern society we inhabit.

Blending ancient and modern traditions helps us find meaning in each.